When Death Valley Comes to Life 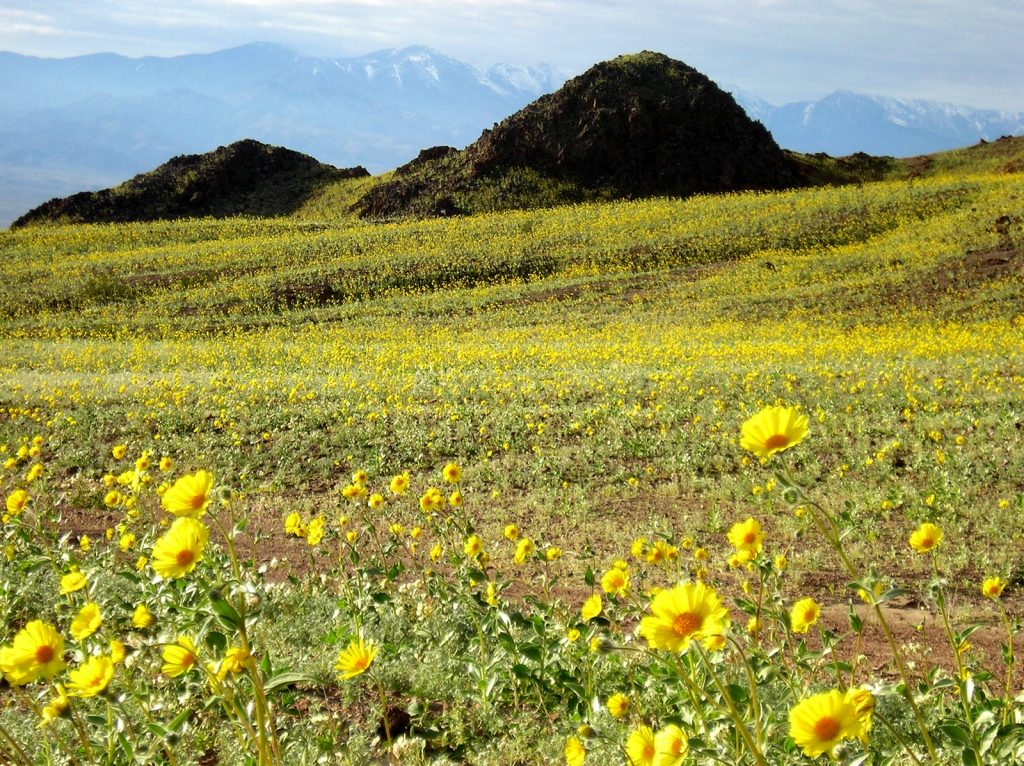 Death Valley is the driest place in North America, in a basin at altitudes below sea level and the hottest place on Earth. Per year it rains just about two inches, making it extremely difficult for most plants to survive. Most of the time, the lower elevations in the park appear stark: a landscape of salt flats, sand dunes and rocky mountains vegetated by a few hardy shrubs and small trees. This land of extremes comes with its wonders and “striking contrast.”

For most of March, instead of the arid scenery of rocks and gravel, huge swaths of yellow, white, pink, and purple wildflowers have flooded Death Valley’s hills. Wildflower seeds may lay dormant for years waiting for the right conditions when rains trigger them to sprout.

During October 2015, a series of unusual storms dropped locally heavy rainfall in several areas of the park. Unofficially, The National Weather Service estimated that over 3 inches of rain fell in just 5 hours in one area of the park. These conditions caused a large-scale wildflower bloom. Becoming an astonishing display of colors and textures. Some call this a “Super Bloom.” Previous super blooms of 1998 and 2005 occurred with  El Nino by shifts in the track of winter and spring storms into the area, increasing rainfall during flower season. You can still see some of this marvelous scenery. A park update earlier this week reported:

Although the lower elevation flowers are fading, there are still some good places to see them. The Desert Gold (Geraea canescens) is still looking really special between Mile Marker 23 and Mormon Point on the Badwater Road. Mud Canyon on theDaylight Pass Road still has lots of flowers. Artist’s Driveis looking really nice, too. This is a good place to keep an eye out for the elusive Desert Five Spot (Eremalche rotundifolia). Many other locations in the lower elevations still have some flowers, just not in the same numbers that were there a couple of weeks ago. One flower to look out for is the Gravel Ghost (Atrichoseris platyphylla). This relatively late bloomer is having a fantastic year, with some of the largest and loveliest displays I’ve ever seen. 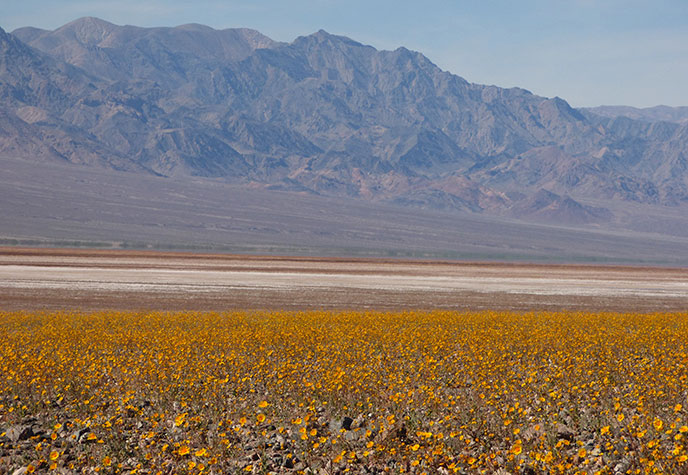 Death Valley National Park is a year-round location. However, in spring when temperatures are dropping below the 100-degree mark and begin to moderate, we see the peak visitor season. The park contains an amazing variety of terrain, historic sites, plants and animals for outdoor adventurers to explore in its over three million acres of designated wilderness and hundreds of miles of backcountry roads. So, don’t hesitate to pack all your camping gear and make the most of your visit.

There are nine campgrounds with varying facilities and seasons. Lodging, camper stores, restaurants, dump stations, fuel and auto services are available at Furnace Creek, Stovepipe Wells Village, Panamint Springs and the towns adjacent to the park.

Keep in mind that all flowers should be enjoyed in their place, as picking wildflowers or removing them from the park is illegal and reduces other visitors’ enjoyment. It is your responsibility to leave no trace of your visit so everyone can enjoy Death Valley for generations to come.