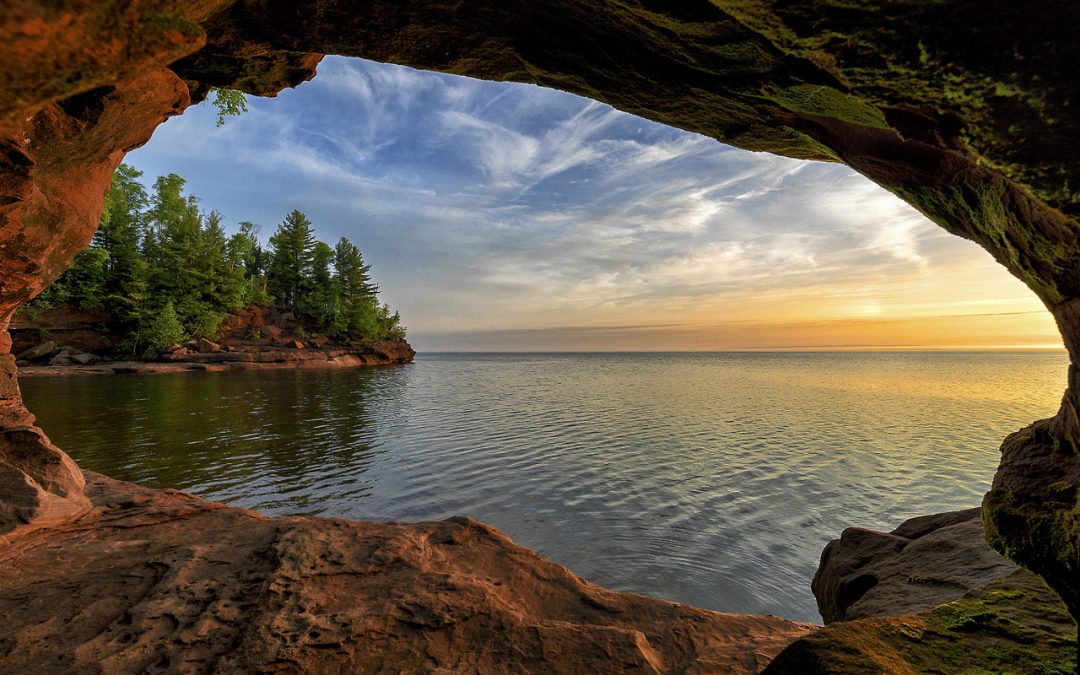 One day I hope to actually visit the Great Lakes in person. Do you have any favorite spots or special places you would like to eventually visit around the Great Lakes? This week my virtual adventures carry me off to Apostle Islands National Lakeshore in WI.

Lake Superior is the largest freshwater body in the world. Apostle Islands National Lakeshore is located on Lake Superior in northwest Wisconsin, the Apostle Islands group comprises 22 islands ranging in size from 3 to 9,900 acres. The National Park Service-protected area includes 21 of the clustered islands, a twelve-mile strip along the northwest shoreline of the Bayfield Peninsula, and the one-quarter mile of water surrounding each of these landforms. In total, the national lakeshore landscape encompasses 69,372 acres (of which 27,232 are submerged) across 450 square miles. The islands are noted for high cliffs of reddish sandstone with many wave-formed arches and caverns that develop magnificent ice formations in winter. Sandy beaches also meet the cold, clear lake waters. The islands were probably named by 17th-century Jesuit missionaries for the Twelve Apostles. One of the popular things to do and ways to get around the islands are by sea kayaking.

In 1970, largely through the efforts of United States Senator Gaylord Nelson, 20 islands and 2,500 acres on the tip of the Bayfield Peninsula were designated as the Apostle Islands National Lakeshore. In 1986, Long Island was added to the designation, putting 21 islands under the direction of the National Park Service. Madeline Island is the only Apostle Island not designated as part of the Apostle Islands National Lakeshore. Leo and Bella Capser of St. Paul, Minnesota, began summering on Madeline Island in 1903. In 1955 they began efforts to establish a museum there, enlisting the assistance of both year-round residents and summer cottagers, specialists and amateurs. The Capsers opened Madeline Island Historical Museum on June 15, 1958. A decade later they deeded the property to the Wisconsin Historical Society and it became the Madeline Island Museum historic site. Other relics of the islands’ history can be seen in late-19th-century brownstone quarries on three islands and at the Manitou Island fish camp, where commercial fishermen built temporary housing near fishing sites. Headquarters of the national lakeshore are in Bayfield along the eastern shore of the peninsula.

This remote park offers 21 undeveloped islands to explore, with zero roads among them. Take a boat tour to see the remarkable geology of the park’s glaciated sandstone, including its famous sea caves; experienced paddlers can bring or rent a sea kayak to explore Lake Superior on their own. Backcountry camping enthusiasts can pick from campsites on 18 of the park’s islands, and hikers can explore trails to lighthouses, beaches, overlooks, abandoned quarries, and old farm sites. Mixed conifer and northern hardwood forests cover the islands; logging was once an important activity. Wildlife includes white-tailed deer, black bears, coyotes, river otters, and beavers, but these animals are rarely seen. Birds such as bald eagles, loons, cormorants, ducks, and gulls are abundant. Eight lighthouses were built in the archipelago, and all have been automated; the exterior of the Raspberry Island light station has been restored to its early-20th-century appearance. Some old-growth forest of white pine, hemlock, cedar, and birch remains where it was once reserved for the use of lighthouse keepers. Although Apostle Islands National Lakeshore features several points of interest located on the mainland, most people consider the islands themselves to be the most rewarding destination.

The National Lakeshore headquarters center is located in the old Bayfield County Courthouse on Washington Avenue between Fourth and Fifth Streets, Bayfield, Wisconsin. Bayfield, Wisconsin is located in far Northern Wisconsin on Lake Superior. To get there from Duluth, Minnesota look for US53 and follow it South crossing the Wisconsin state line till you get to Wisconsin state road 13. Then follow WI-13 East 85 miles to Bayfield. Major airports in the region that support daily flights are Minneapolis, Minnesota which is 155 miles to the Southwest and Chicago, Illinois which is 550 miles to the Southeast.

There is one campground on the mainland called Little Sand Bay Campground. This campground is right on Lake Superior shore and it has 32 RV sites with electric. There are 6 tent-only sites there also. Showers are provided along with the availability of firewood and ice. There are also remote, backcountry camping options within camping zones on 16 of the islands. There are at least 31 campsites scattered amongst the islands…Here is the National Park Service link to view numbers and pictures of each one. All sites are primitive…some sites have privies and most sites have a vault toilet at the dock. Bears can and do swim to each of the islands so food lockers have been provided at some of the islands.

Based on https://freecampsites.net/#!Bayfield,%20Wisconsin there are 10 free campsites located within 56 miles of Bayfield, Wisconsin.

Kayaking is the recommended way to get to most of the islands if you choose not to go on one of the NPS’s cruise ships. To get to one of the sea caves take your kayak to launch from Meyers Beach, where you’ll need to carry your kayak down a flight of stairs from the parking lot to the beach… From there, paddle just over a mile along the beach to the start of the caves. The red sandstone cliffs stretch for two more miles, with countless slot canyons, caves, tunnels, archways and other rock formations to paddle in, through and around. Several cruises are available in and around the Bayfield area including Apostle Island Cruises which is authorized by the National Park Service as a park concessioner.

Park staff may be available to conduct guided tours of the lighthouses at Devils, Michigan, Raspberry and Sand islands from mid-June to September. Go scuba diving in the clean, clear water and see underwater rock formations and fascinating shipwrecks. Spend a day on the largest of the Apostle Islands, the only one that doesn’t belong to the National Lakeshore… Madeline Island. The ferry boat ride getting there is part of the fun. You can also visit Madeline Island Historical Museum which tells stories of cultural connections from the Ojibwe to European fur traders. 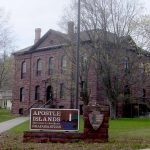 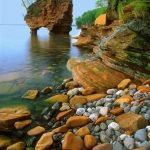 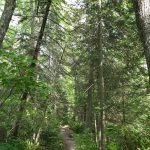 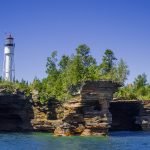 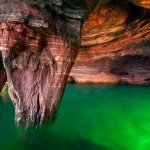 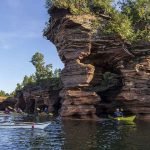 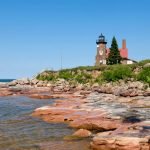 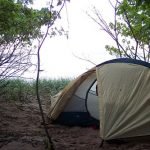 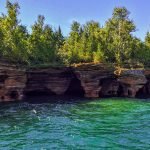 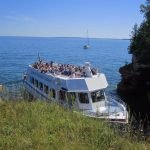 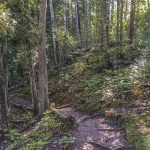 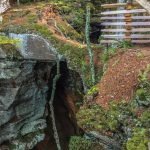 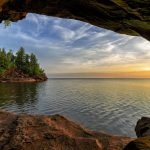 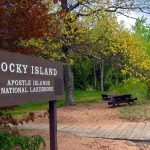